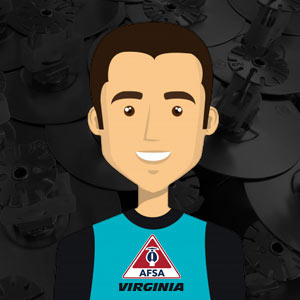 Craig S. Smith is in Sales with Ferguson Fire & Fabrication. He has 38 years in the Fire Sprinkler Industry. In 1978 he began his career in the Fire Sprinkler Industry as a fitters-helper in Maryland. He quickly worked his way up the ladder to a fitter and then foreman while taking various training courses including Associated Builders & Contractors Courses and several engineering & design courses. In 1986, he joined J&G Products on the supply side of the industry and enjoyed working to grow the new company. After several years of expanding J&G’s business he relocated to Richmond, Virginia in 1993. At that time, he became the Branch Manager at J&G’s new location in Ashland, VA. In 1996 Ferguson Enterprises bought J&G Products and he became Ferguson’s Fire Protection Manager for the Central Virginia market. In 2002 he left Ferguson Enterprises to start his own business; S&S Fabrication & Supply Company, which he was President of Sales & Operations. They provided full-service fabrication and supply for the Fire Sprinkler Industry. In 2005 Ferguson Fire & Fabrication came knocking and bought S&S Fabrication. Since that time, Mr. Smith has been the Branch Manager and more recently the Outside Sales/Business Development for Ferguson Fire & Fabrication. He resides in Mechanicsville, Virginia.